NOTE: Many of our upcoming events have been postponed or canceled. For information about a specific event, please contact the event organizer(s). Thank you!

“The Phat Pack, The Best of Broadway” at Campanile Center

The Phat Pack opened in the fall of 2012 in Las Vegas to rave reviews, and standing ovations.  The show played for almost a year at The Plaza Hotel & Casino in downtown Las Vegas, and then moved uptown on the Las Vegas Strip to Bally’s Hotel And Casino.

The Best of Broadway, The Phat Pack brings you music, laughter and dreams.  Broadway performers (formally with Phantom in Las Vegas) sing the great songs of Broadway, American standards, Las Vegas favorites, along with some hilarious new original songs, and share some stories of their lives and careers.  The Phat Pack tips its hat to the tradition of excellence  and fun that earlier singers brought to the Las Vegas musical scene of 50’s & 60’s,  but brings it into the 21st century!

As well as receiving rave reviews after opening in Las Vegas, The Phat Pack was named Best of Vegas 2013 – Best All Around Performers by the Las Vegas Review Journal.

Music combined with fun and show appropriate for all ages is what you will experience at Campanile Center  for the Arts on Thursday, February 18. Auditorium doors open at 6:30pm. Show starts at 7pm. All tickets are general admission and priced at $27.00 each. Advanced tickets are highly recommended. 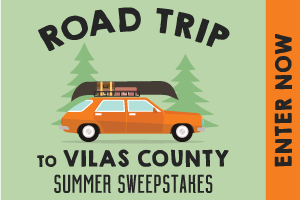 Win some spending money for your next Northwoods vacation!