The World Championship Snowmobile Derby on the Eagle River Derby Track helped put Vilas County on the map as a premier snowmobiling destination. There’s a lot more to snowmobiling in Vilas County than fast sleds; the snowmobile was literally born in Vilas County and on Vilas County’s trails, you can explore that rich past while taking in some incredible natural beauty. Ride on over to these top trailside spots.

Vilas County is home to 1,300 lakes, which makes the riding here especially scenic and unique. For example, in northern Vilas County, on the border with Michigan, you’ll find the headwaters of the Wisconsin River. Lac Vieux Desert is a 4,260 acre, spring-fed lake with a rich history – it was named long ago by French fur trappers. It’s a picturesque lake that’s a nice place to swing past on rides north to the Land O’ Lakes area.

Snowmobile lovers have to ride by this museum in St. Germain – nowhere on earth is there a larger collection of historic snowmobiles!

In Eagle River, the “Snowmobile Capital of the World” explores the history of snowmobiling through the people and machines that started, nurtured and developed the sport.

Downtown Sayner is known as the birthplace of the modern snowmobile, invented by Carl Eliason. See antique sleds on display at Sayner’s Eliason & Co Lumber and Hardware. 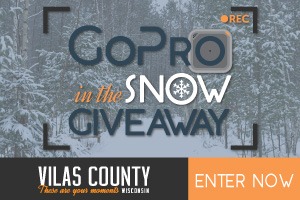 Win a GoPro & a getaway!

There’s *snow* place like Vilas County in the winter! Make fun memories in the snow with a GoPro Hero8, camera mounts and cash to spend.